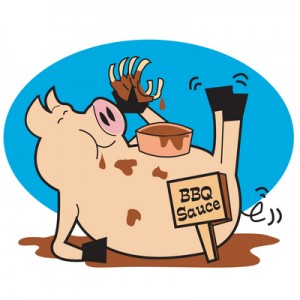 Gates open to the annual pig fest on Friday at 5:00 p.m. with live music. I have heard that The Ed Wright Band take main stage at 6:00 p.m. and Sean Chambers will be the headliner at 9:00 p.m.

On both days there is plenty of entertainment for the whole family to enjoy including: NASCAR Simulators, Interactive Children’s area, Live Music, Tasting Opportunities and some world class barbecue.

Legoland – a soon to be open attraction in Winter Haven, FL at the former Cypress Gardens location – is for the first time the official sponsor for the Kid’s area. A Lego brick building area with thousands of Legos to use for the children’s imagination along with the jump houses, bouncy obstacle course and a lot more.

I can’t imagine spending a better way than to attend this year’s Lakeland’s Annual Pig Fest on January 28 and 29, 2011. In it’s 15th year for its barbecue competition, such as the Kansas City Barbecue Society sanctioned competition, Publix Supermarket Backyard BBQ competition, and for kids, Kids-Q barbecue contest, enticing professional barbecue teams to travel to our beautiful city and compete in four categories: Ribs, Chicken, Pork and Brisket.

A tad bit of history lesson! It started all in 1994 when a small group of local businessmen attended the Blue Ridge Mountain town of Tyron, N.C. to watch a barbeque championship. From then on, a festival committee was established and Lakeland’s Pig Festival welcomed its first barbeque competitors in 1997. Since then, professional teams and backyard teams travel great distances to compete separate in now five different categories in Ribs (loin and spare), Pork (shoulder and butt), Chicken, Brisket (beef) and Sauce. The Kansas City Barbeque Society (KCBS) Professional Competition and Judging School considers Lakeland’s Pig Fest to be one of the finest events sanctioned by KCBS. Lakeland’s annual Pig Fest held at Tiger Town located next to Joker Marchant Stadium has since then grown to over 300 Barbeque Teams competing for prize money and attendance growing quickly each year.

The Junior League of Greater Lakeland became in 2005 the lead organizer for this great event and they do an outstanding job providing volunteers to see that this free event is run smoothly. The Lakeland Pig Festival has contributed over $500,000 to local charities and growing.  The event in itself is free, such as the concerts – as you walk towards the gate, let me suggest you buy “Pig Dollars” near the entrance for food and drinks and also some for your kids, since I’m sure they want to take part in arts & crafts, climbing and jumping. Don’t worry if you run out of the “Pig Dollars or “Pig Bucks”, there are various locations throughout the area for you to buy more.

It is a fun event for the whole family to enjoy.

Check out this video of year’s past at the Lakeland FL Pig Fest!