Lakeland FL – Home of the Detroit Tigers and Flying Tigers 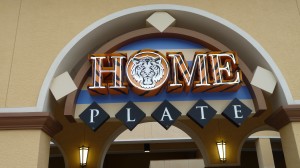 Recently I posted an article titled, “For the Love of Lakeland – Living in Lakeland Florida” and received a comment that there was no mention of the Detroit Tigers.  There are so many things mentioned in #LoveLakeland article and only devoting a small paragraph would not do justice because of this great relationship and history between the two cities. I thought that the Detroit Tigers along with the Lakeland Flying Tigers deserve a blog post of it’s own.  So here it goes:

As Winter arrives in the Northern states, especially in Michigan, folks flock down to Lakeland, Florida enjoying the warmer climate and waiting for Spring to arrive.  As soon as February approaches you can see folks flocking to Lake Parker Drive with their binoculars and cameras trying to get a glimpse of the Detroit Tigers’ workout.   Lakelanders and folks from all around the states enjoying a grand tradition watching the Detroit Tigers annual spring training and games.

Baseball’s Detroit Tigers and the city of Lakeland, Florida have one of the longest standing relationships.  In fact, since 1934 the Detroit Tigers have been training in Lakeland. Joker Marchant Stadium named after former Lakeland Parks & Recreation Director Marcus Thigpen “Joker” Marchant”, hosted its first game on March 12, 1966.  In the latest renovation of 2003, a mediterranean-style exterior along with improvements to everyone’s delight was completed.

The Lakeland Flying Tigers is a minor team who had one of the longest unbroken relationship which is still alive. In 2012 they won their first Florida State League in twenty years. The Flying Tigers are also very active in the local community by holding education days to baseball camps to various other special events throughout the year.  For more information about ticket prices and other information, please click here.